Why Do You Need Switch ACLs?

When one thinks of Wi-Fi Security, one is typically considering the 802.11 security protocols, such as the advantage of WPA2 over WPA and WEP, the use of pre-shared keys vs. 802.1x with RADIUS servers, implementing captive portals, etc.   All of these mechanisms are designed to control who has wireless access to your network and, generally, corresponding access to the Internet.

While these protocols are necessary to control access, they are insufficient in protecting user behavior once the devices are associated, especially with regard to inter-user communication.   The security of a Wi-Fi network relies upon the security of the underlying wired network infrastructure.   This is especially important on guest networks, whether in a private home, cafe, retail establishment, hotel, or large corporate facility.   Typically, guest networks are placed on their own VLANs (see previous post on VLANs) with their own subnet (see previous post on IPv4 Subnet Masking) to isolate them from other networks at the facility used for operations data, such as personally identifying information (PII), credit card transactions, health records, and other protected data.

There is generally a further requirement that client devices on a guest network should have access to the Internet but not be able to intercommunicate with each other.   If you are a guest at a hotel using their Wi-Fi, you don't want the hacker staying in another room to access your device over the hotel's Wi-Fi network.   Within an AP, most devices have a feature, per SSID, labeled something like "client isolation" or "station isolation" to prevent users connected to the same AP on the same SSID from communicating with each other. However, most networks consist of multiple access points, and client isolation features generally only work within an AP.   How do you prevent devices connected to one AP from seeing devices connected to a different AP within the same network?!

Take the following picture, which is a simple representation of a typical SMB network.   There are a couple of APs connecting both guests and staff, and a wired security camera which should only be accessed by the owner.  This network could have three VLANs: one for guests, one for staff, and one for security. 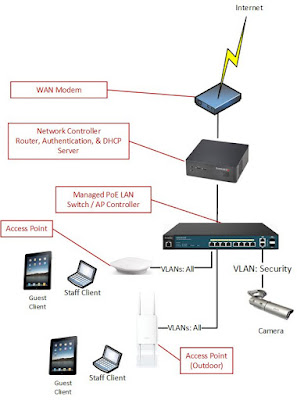 While some AP vendors offer a "layer 2 isolation" feature to attempt to block such inter-AP user communication, this feature is not universally available, and such features are not effective in many situations, especially if there are wired clients on the same guest network that also need to be isolated, as shown here.

A better approach is to use the ACL feature available on managed layer 2 switches to control the interaction of clients across all of your subnets.   ACLs act as a firewall for all traffic coming into a switch port, and thus are an extremely versatile and valuable tool, and should be deployed in any environment where such interactions need to be controlled.

Unfortunately, ACLs tend to also be very poorly documented and explained by switch vendors, and it is quite easy to get yourself into trouble and lose access to your switch and to other parts of your network.   This post provides a guide on how to successfully configure ACLs for this type of network environment.

How does an ACL work?


Access control lists (ACLs) are rules implemented on a router (and on firewalls) to identify what traffic is allowed and what traffic is denied. Rules within the ACLs provide rule-based management for the router and control inbound and outbound traffic. ACLs on routers provide basic packet filtering. They can filter packets based on IP addresses, ports, and some protocols, such as ICMP or IPsec, based on the protocol identifiers:
Reference:  Gibson, Darril (2014-09-16). CompTIA Security+: Get Certified Get Ahead: SY0-401 Study Guide (Kindle Locations 5167-5189). YCDA, LLC. Kindle Edition.

How to configure an ACL?

This is best done by example.   Say we have the network in the figure above, and I have defined the following VLANs below.   In addition, I have complex client isolation rules on my security network, which are highlighted.
There are other "implicit requirements" for the network, which I will make explicit as follows:

Here are the steps to be followed:


Given that ACL rules do take processing power, you want to develop the rules as efficiently as possible.   We defined these four VLANs and all of their rules in 13 steps.

Granted that a malicious hacker can set up their own subnet and rogue DHCP server, but they would need detailed knowledge of the IP scheme on your network.   Meanwhile, accidental rogue DHCP servers are blocked, and fairly complex rules for isolation on the security network can be defined.  Furthermore, we allow all traffic from and to a device with a 192.168.x.1 address, so DHCP ranges should be defined on the partial class B subnets to not provide a 192.168.x.1 address in the subnet.

Once rules are defined, they must be applied explicitly to the switch ports.   Switches will allow you to provide different ACLs to different switch ports.  This is not recommended - best practice is to define an efficient set of rules covering all of your subnets, then apply the same rules to all ports.   This is to prevent mistakes and keep the network administrator sane.

This is what application of ACL rules look like in a managed switch web interface.  The figures here are from an EnGenius EWS switch.

Posted by Jason D. Hintersteiner at 8:27 AM No comments: