In 802.11n, two radio technologies, Multi-In Multi-Out (MIMO) and Transmit Beamforming (TxBF), were introduced as mechanisms to enhance throughput and range of Wi-Fi signals.  While these techniques were new to Wi-Fi, they were based closely on radar and celluar radio technologies that have been used successfully for decades.  802.11ac introduces a further enhancement, Multi-User MIMO (MU-MIMO), that leverages both of these other techniques to enable an AP to literally talk to multiple clients simultaneously.

This post is intended to provide a pragmatic, easy to understand guide for Wi-Fi engineers and  professionals of how Wi-Fi systems utilize MIMO and Beam Forming in 802.11n and MU-MIMO 802.11ac.  While basic physics and mathematical principles behind this technique will be discussed, this is not intended to provide a comprehensive mathematical proof of all of the physics and mathematics involved in making these techniques work.

When an antenna transmits a radio signal, the propagation of the signal does not just proceed in a straight line to the receiver.  Instead, the signal spreads outwards from the transmit antenna, and parts of the signal can be impacted by reflection, diffraction, and reflection from objects in the environment.  As a result, the radio signal that reaches the receive antenna comes in along multiple paths.  This effect is known as multipath.  Multipath serves to shift the phase of the signal, and the multiple paths recombining at the receiver antenna can constructively or destructively interfere. 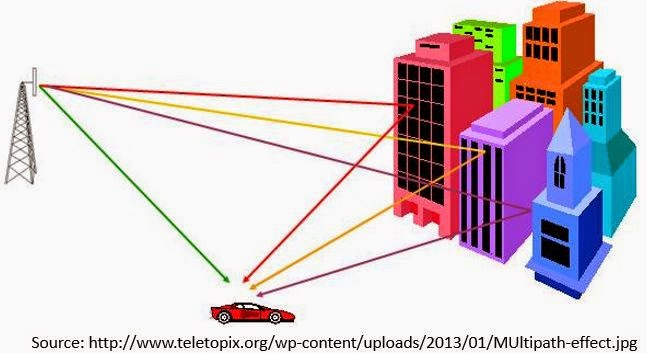 In older 802.11b/g networks, this effect was a large problem, and was typically addressed by using access points utilizing receive diversity across two antennas.  The two antennas were physically separated so as to be out of phase with each other (i.e. an odd multiple of 1/2 wavelength), so that one antenna would receive a stronger signal (i.e. a signal with more constructive interfere) than the other (i.e. a signal with less constructive interference).  The access point would then use whichever antenna was last "stronger" to transmit to the client.  While helpful, diversity is far from foolproof.   First and foremost, most client devices did not utilize multiple antennas, so any improvements from diversity really only occurred in the upstream direction.  Additionally, multipath signals that net out to a 45 degree phase shift would be equally good (or bad) on both antennas.

Starting in 802.11n, MIMO was introduced as a method for taking advantage of multipath to either increase capacity or increase range.   For MIMO to work, each wireless device has multiple radio / antenna chains which are identical and physically separated from each other so as to be out of phase.  A Wi-Fi MIMO device will be indicated by the following:

In MIMO, each spatial stream is transmitted from a different radio/antenna chain in the same frequency channel.  The receiver will receive each stream on each of its identical radio/antenna chains.  Since the receiver knows the phase offsets of its own antennas, it can use signal processing techniques to mathematically reconstruct the original streams.

To increase signal range, 802.11n uses space-time block coding (STBC), where the same information is transmitted across multiple antennas.   Since copies of the same information are sent, once the receiver mathematically decouples the individual streams, it can easily determine the phase offsets between the streams and "constructively interfere" them mathematically, producing a stronger resultant signal.  Hence, a receiver can receive a data stream at a particular MCS rate at a worse absolute signal-to-noise ratio, and thus can be further away from the transmitter.   When using this MIMO method, additional receive radio/antenna chains are useful to even further mathematically enhance the signal.  There is a related technique in the 802.11n spec intended for use with legacy client devices (i.e. 802.11b/g) known as cyclic shift diversity (CSD), where each stream has the same data but is sent with a slightly different phase offset.  The intent of CSD is to create more constructive interference at the 802.11b/g receiver, though it is subject to the same limitations as 802.11b/g devices with multipath, and as such is rarely used in practice.

To summarize, when each spatial stream contains the same data set, MIMO enhances the signal.  When each spatial stream contains different data sets intended for the same receiver, MIMO enhances throughput.   Since MIMO is virtually always used in practical applications to enhance throughput, additional radios are not required, and the number of transmit radios / receive radios, and spatial streams are identical.   The number of streams actually used is driven by whichever device (transmitter or receiver) has fewer radios.  In practical terms, this is usually the client device.  Most smartphone and tablet devices only have support for one or two streams, to conserve both space and battery power.

There are two major caveats, however, to using TxBF:
Beam forming requires the use of a phased antenna array,  where there are multiple identical antennas at fixed separation distances (so as to be out of phase).

Like CSD, the phase of each data stream is transmitted by all antennas with different phase offsets.  However, unlike CSD, the phase offset from each antenna is deliberately calculated to constructively interfere at a particular point in space (i.e. the  location of the receiver), thereby enhancing the signal strength at that location.  The signal can be enhanced by 2x (i.e. 3 dB) for every phased antenna.

When using omni-directional antennas, which is the case with most access points capable of supporting beam forming, the effective antenna pattern created tends to be symmetrical.

In order to identify the location of the client, there are sounding and calibration packets (think sonar) that are passed between the access point and the client to pass back appropriate parameters so that the access point can mathematically estimate the relative location of the client device.  I am not going to cover the details of this process - Chapter 10 of the CWAP Certified Wireless Analysis Professional Official Study Guide: Exam PW0-270 provides a very comprehensive, though somewhat incomprehensible, explanation of this.   Suffice it to say that the client device driver must support receiving and sending such messages to the access point, and most 802.11n and 802.11ac wave 1 clients do not offer such support.  Client device support is required for 802.11ac wave 2, however, as beam forming is at the heart of MU-MIMO.

The BeamFlex(TM) technology deployed by Ruckus Wireless is essentially a beam forming antenna, though uses proprietary technology that is completely independent of TxBF.  Instead of using omni-directional antennas, each antenna is actually an array of directional antenna elements.  When a signal comes in from a client, the strength and relative polarity of the signal on each antenna element can be used to mathematically triangulate the position and orientation of the client device.  Accordingly, since the AP itself determines the position of the client, there is no need for client device support.  Ruckus originally introduced this technology on its 802.11g access points.  Because it is using an array of directional antennas, the resulting beam pattern can be made more directional than in the 802.11 TxBF case. 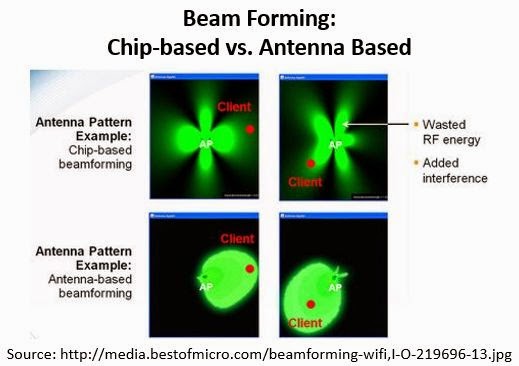 In conventional MIMO, the multiple BeamFlex antennas are all given identical profiles.  Thus, BeamFlex can be combined with TxBF for additional effect. 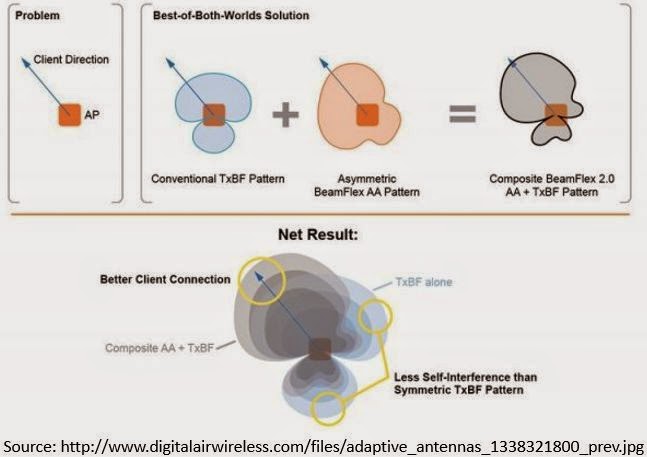 
The throughput gain of conventional MIMO is limited by the number of spatial streams supported by the client device, and that is limited by the size and power capacity of the device itself.  So how can throughput be further enhanced in Wi-Fi to help our insatiable desire for faster wireless speeds?

In 802.11ac wave 1, throughput is enhanced by going to wider channel widths and the more complex 256-QAM modulation and coding scheme.  Both of these have limitations.  The total size of the 5 GHz band is "finite", and thus wider channels lead to fewer independent channels and are subject to larger interference.  While there are efforts in the US Congress to open up for unlicensed spectrum, The 80 MHz channels introduced in 802.11ac wave 1 is likely a hard practical channel size limit going forward.  802.11ac allows for 160 MHz channels, though given that this only provides two independent channels on the entire 5 GHz band, using 160 MHz channels is impractical for multi-AP deployments.   Furthermore, the new 256-QAM scheme requires a minimum SNR of 29 dB, meaning that you need to have a really good signal between the Wi-Fi devices, only making this achievable at very close distances in very clean RF environments.

The other method of enhancing throughput, of course, is to actually talk to multiple client devices simultaneously, and this is what multi-user MIMO (MU-MIMO) in 802.11ac will attempt to achieve.  It utilizes both conventional MIMO, TxBF, and extra transmit radio chains to send different streams to different client devices in the same environment.

There is a question as to how "ACKs" work with MU-MIMO.   Since the AP can only talk or listen at any given time, how can the AP receive ACKs occurring from multiple clients?   Logically, the transmission length to all of the clients would be approximately equal, so that the transmissions start and end at the same time.  Otherwise, the AP would miss the initial ACK as it would still be transmitting to other clients.  However, if the clients are all waiting a SIFS and then responding with ACKs, these are also happening simultaneously.  There are a couple of potential mechanisms around this, though I do not know what vendors are using:

While the practical gains from the complexity of MU-MIMO are still a big unknown, the equipment manufacturers are charging ahead full steam.  Ruckus just introduced the first enterprise 802.11ac wave 2 MU-MIMO access point, the R710, on April 2, 2015.   Other enterprise vendors are not currently scheduled to introduce their models until the end of 2015 / beginning of 2016, though I expect that there are already large efforts at some vendors to pull in these dates.  From a practical standpoint, however, very few client devices currently support TxBF, so MU-MIMO cannot be implemented.  Thus, we will continue to wait until its true ability to improve throughput can be assessed.
Posted by Jason D. Hintersteiner at 2:43 PM