The Wi-Fi Range Sucks! Or Does It?

As a Wi-Fi engineer, I get the following type of question an awful lot from people who are not immersed in Wi-Fi technology and not technology experts:

Why is the range of the Wi-Fi so poor?  Why can my device connect to my old cheap consumer WAP and not to your fancy and expensive enterprise access point?

This is a hard to answer this question in a manner that is both simple to understand / not very technical while also being accurate and comprehensive.  But here goes...

It is very common for consumer-grade access points to advertise and tout their range (i.e. area of coverage).  They do this by cranking up their transmit power to FCC maximums (around 30 dBm = 1 Watt).

To first order, the speeds achievable over Wi-Fi are a function of the distance between the transmitter and receiver, as shown below.   Intervening objects, like walls, furniture, etc. will also attenuate the signal in a non-symmetric way, so in reality the signal is never symmetric, so consider this a vastly simplified illustration only. 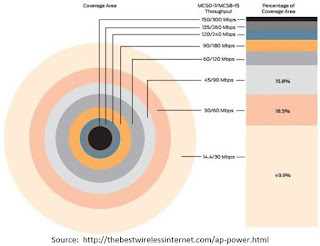 The problem is that Wi-Fi communication is asymmetric, and the transmit power of your smartphone or tablet is about 100 times less than that of the AP (around 10 dBm = 0.01 Watt).  The device manufacturers do this purposely to maximize battery life.   Hence, comparatively, the consumer-grade access point is screaming whereas the client device is whispering.  Accordingly, a client device can hear the access point fairly well at reasonable connection speeds, but it is very hard for the access point to resolve upstream messages from the client device, even at very low connection speeds.

This asymmetric mode of operation was still “ok” in the days when Internet traffic was primarily downstream to a device.  For example, you’d type in a URL in your browser, or click on a link, send a small amount of information upstream to the Internet, then download a whole lot of data and content to your device.

Alas, modern Wi-Fi usage no longer works this way.  People expect to take pictures and videos and either email them to friends and/or post them to social media. Wi-Fi appliances, sensors, and cameras are constantly streaming data to the network.  Accordingly, there is quite a lot more upstream traffic from the wireless devices to the access point and the Internet.  Very slow upstream speeds resulting from a weak transmitter only serve to make the Wi-Fi seem “slow”.


We’ve been conditioned by the manufacturers of consumer Wi-Fi equipment to think of Wi-Fi like a can of paint:  “e.g. one access point covers 2500 sq. feet”.  The reality is much more complicated and nuanced – it depends on what is in your environment (e.g. drywall vs. stucco vs. metal walls, furniture, appliances, etc.), the number and types of devices you have on your network, what kind of traffic is being passed, both upstream and downstream, and how fast you want your wireless devices to access the Internet.